Permanent URL for this record: 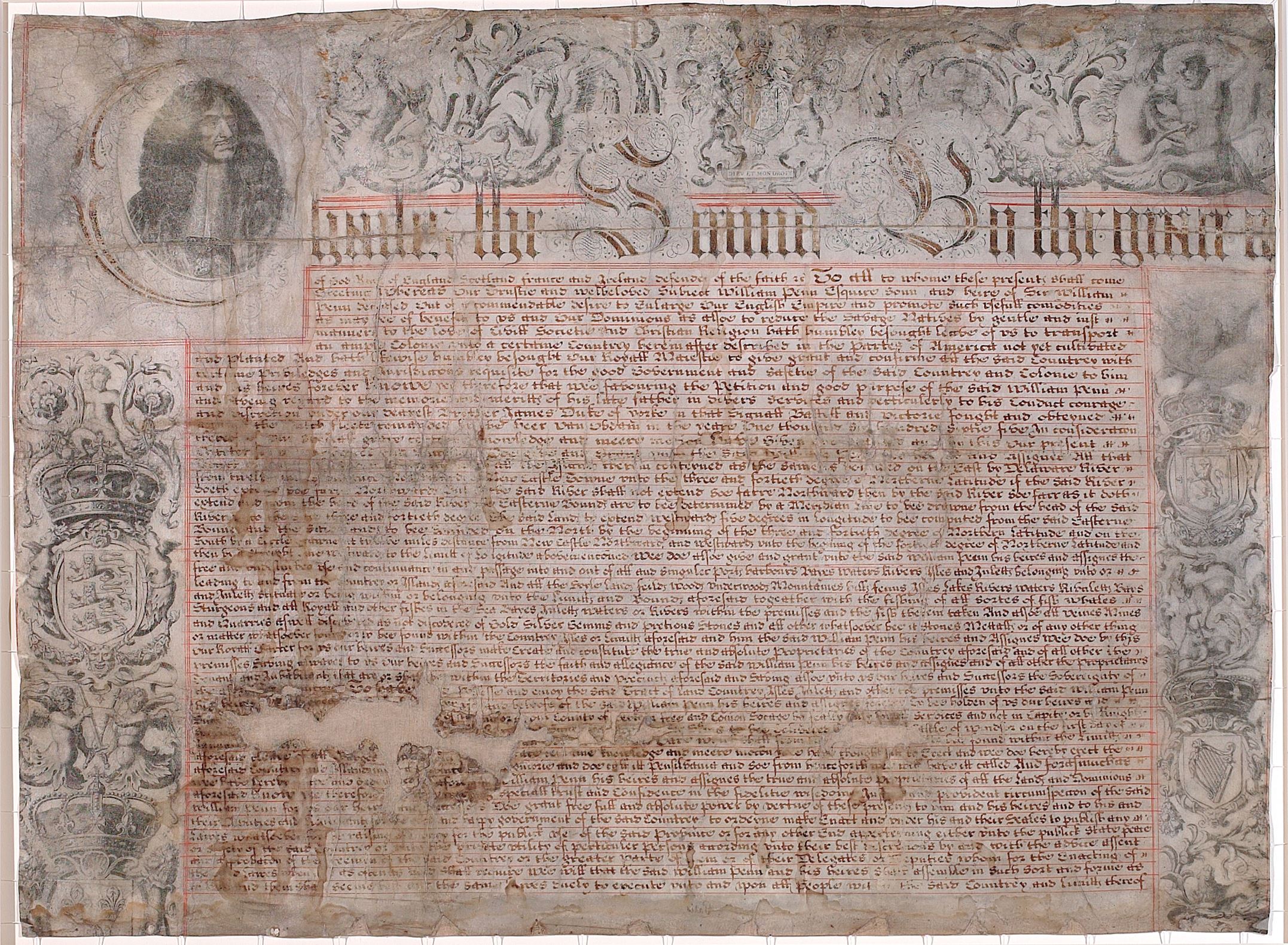 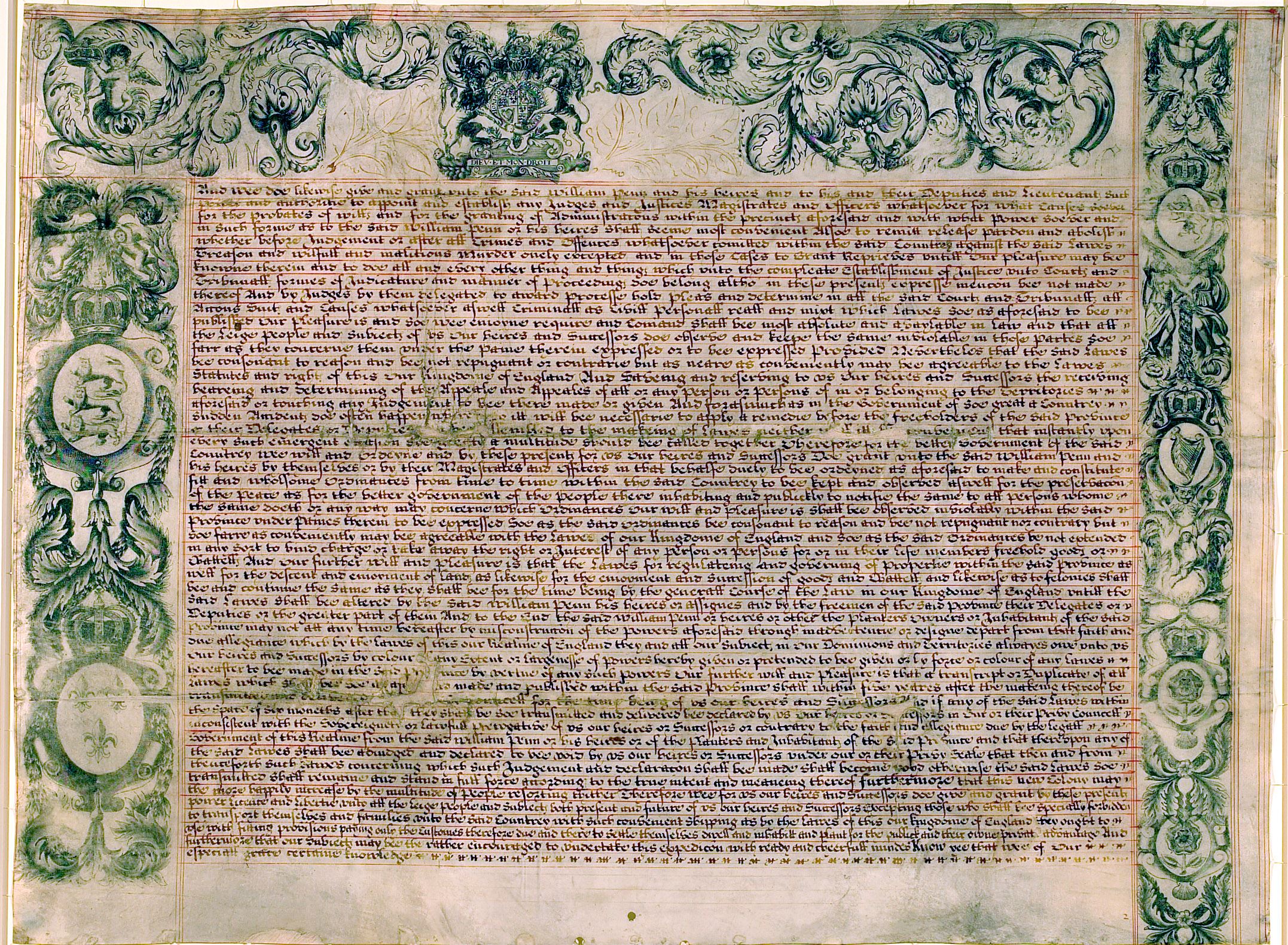 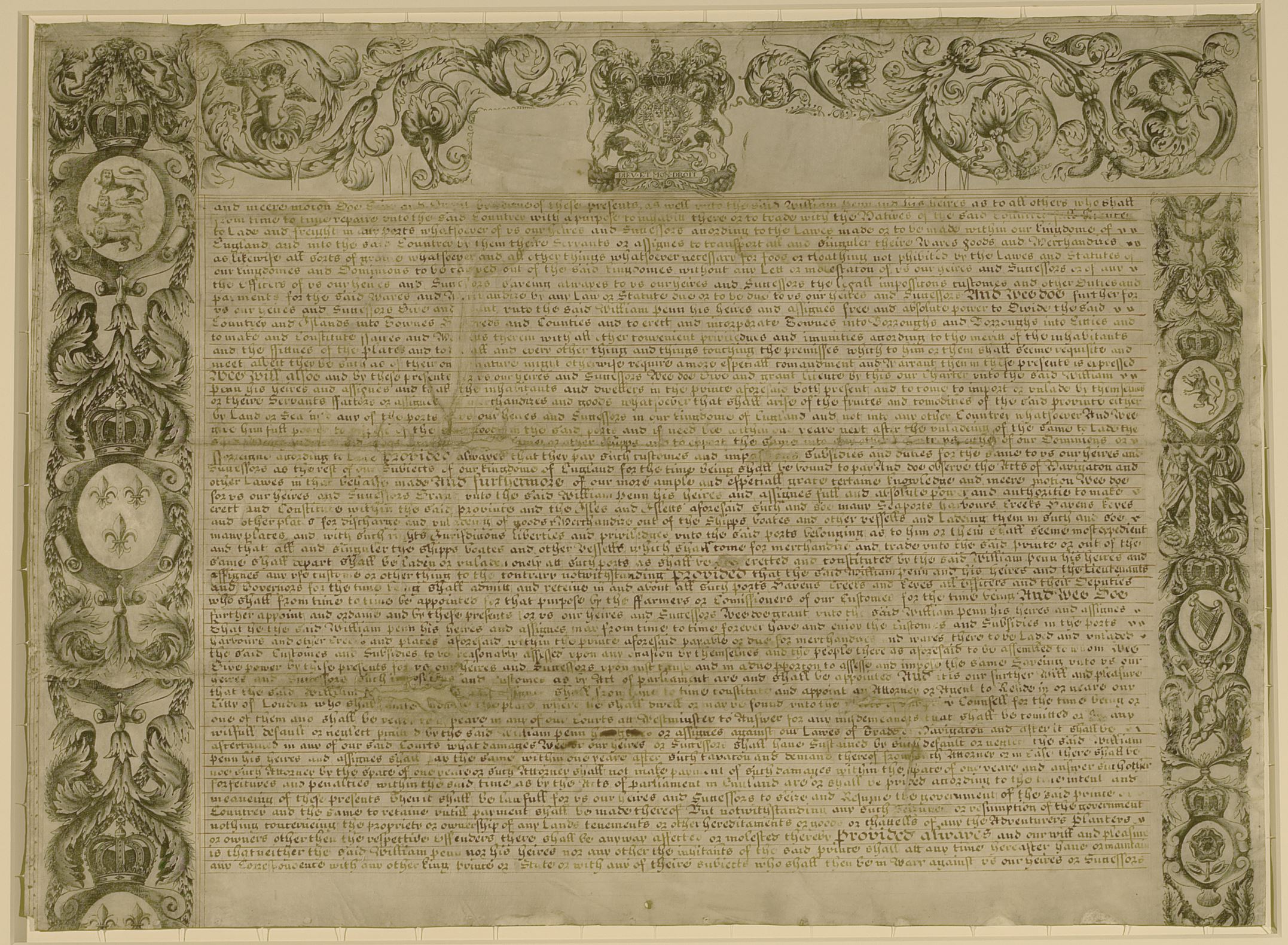 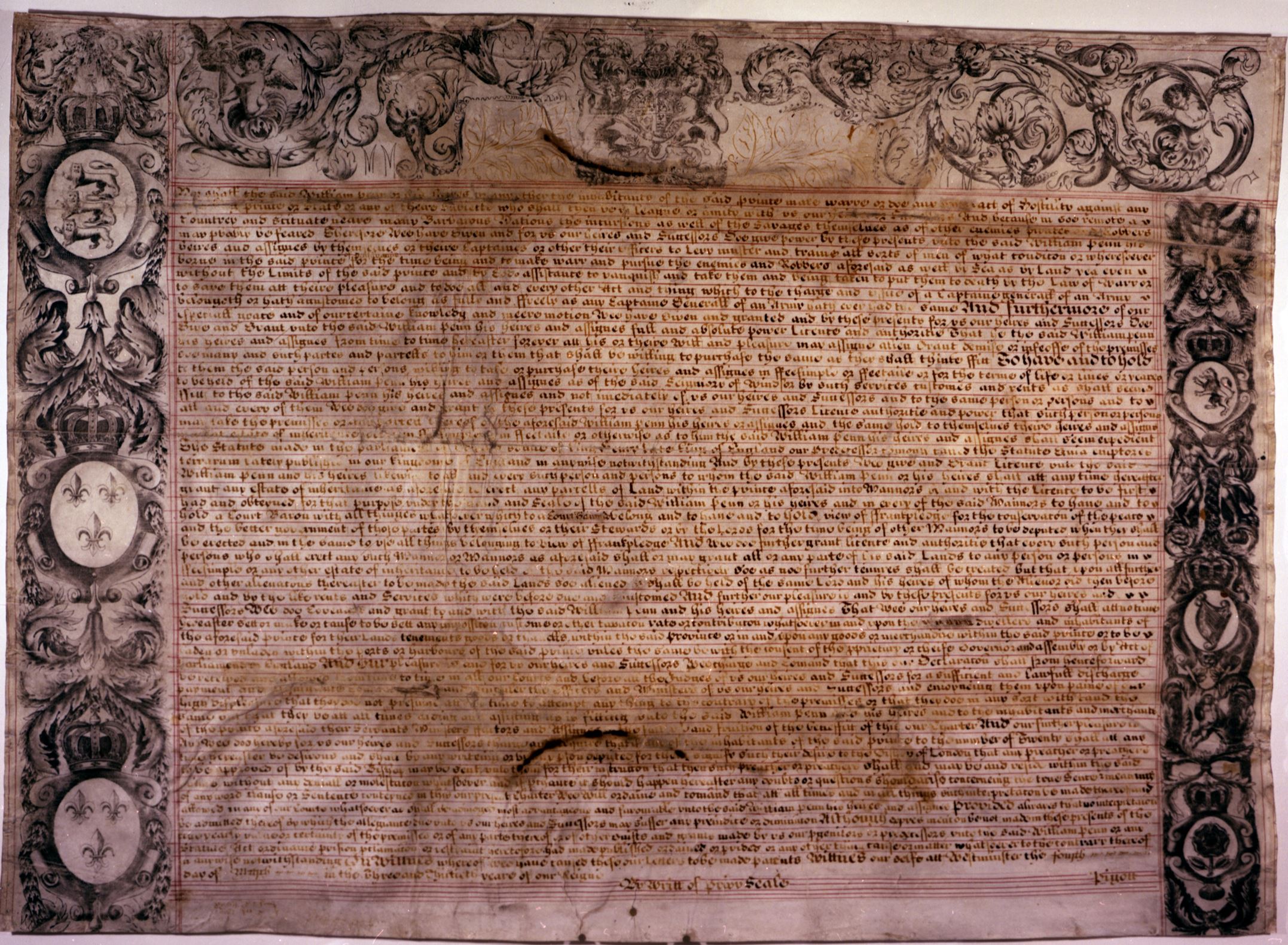 The Charter is four pages on parchment with iron gall ink, each measuring an average of 23"x31½". The upper left corner of the first page bears the portrait, or cartouche, of Charles II. The borders of each page are embellished with the shields of lands conquered at one time or another by England, including France, Wales, Scotland, and Ireland. The four pages were bound together at the bottom of each page with a silken cord, and in turn the cord threaded through the Great Seal of England. The Seal, made of green beeswax and placed in a metal box called a skippet, hung like a pendant from the document. The document was given to the Commonwealth of Pennsylvania in 1812 by a lawyer representing the Penn Family. By this time, constant folding and unfolding of the popular first page caused rotting of the parchment in the lower left corner. In the 1830s, the entire document was placed on permanent display in the office of the Secretary of the Commonwealth, where it remained for most of the 1800s. At that time approximately five inches of each page at the bottom were trimmed away to fit in frames for display purposes. The silken cords binding the pages, together with the Great Seal of England, were also removed, and have since been lost. The Charter remained under the administrative responsibility of the Department of State until transferred to the newly created State Archives early in the 1900s. It was displayed at the State Museum until 1984 when it was removed due to increasing concern for its fragility and security, and replaced with full-scale color facsimiles. The document is presently housed in a special climate-controlled high security vault in the State Archives in Harrisburg, and is displayed on special occasions. 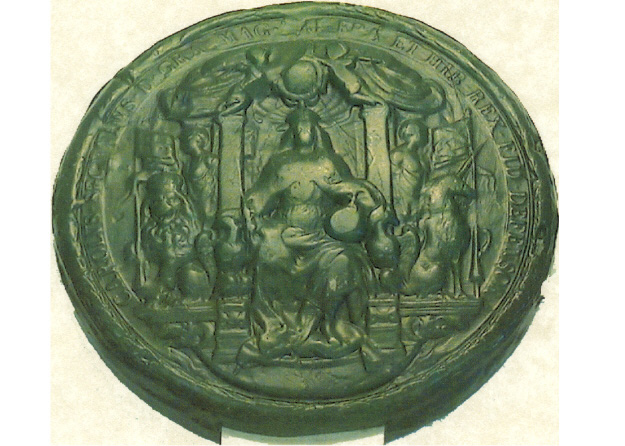 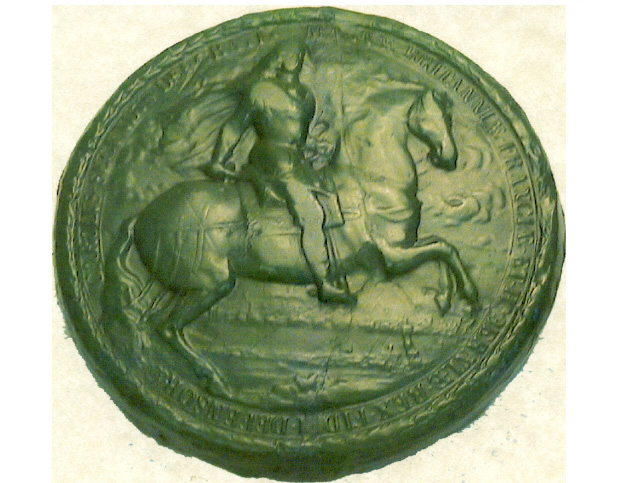 The King, enthroned, front view, crowned, with long hair flowing over the back of the right and in front of the left shoulder, wearing the collar of the Garter, holding in his right hand a sceptre nearly perpendicular, slightly inclining to the left, his left hand placed upon a large orb ensigned with a cross which rests upon his left knee. The throne is supported at its base by two eagles; the arch behind the King's head is upheld by two pilasters: the interior of the arch is curved in representation of a large shell; above the arch is a canopy with festooned curtains in front of which are two winged infant Angels supporting a shield bearing the Royal Arms, the same as on the shields in the Seal of James I., encircled with an inscribed Garter, which is ensigned with the Royal Crown. Outside the pilasters of the throne, on each side, is a female terminal figure facing outwards. On the left side of the Seal is a lion sejant guardant, crowned, supporting with his right paw a spear from the top of which flows a long pennant in many folds, on the front fold displaying the Cross of St. George. On the right side of the Seal is a unicorn, turned to the right, sejant, gorged with a coronet composed of crosses and fleurs-de-lis, supporting with his left paw a spear bearing a pennant in many folds, on the front fold of which is the Cross of St. Andrew. The legend is placed upon a band beyond which is a narrow laurel wreath, bound together in four places with crossed ribbons. Legend : CAROLVS – SECUNDUS – D– GRA – MAG – DRI – FRA – ET – HIB – REX – FID – DEFENSOR. Counterseal: The King on horseback prancing to the right, his head uncovered, the face turned three-quarters to the front, his hair flowing over his shoulders and back. The King is clad in armour with a cloak fastened over his right shoulder and flying behind his back, and is riding with single curb rein; in his right hand is a straight sword nearly horizontal but with the point downwards, his foot spurred and placed in the stirrup. The horse is rearing and is harnessed with bridle, saddle, saddle-cloth, and a strap passing round the whole length of its body; from behind the saddle fall three straps across the flanks of the horse hanging almost perpendicularly towards the ground. In the background, under the horse, is a view of the river Thames , and of London and Southwark connected by the Bridge. The legend is placed upon a band broken into by the tail of the horse. Beyond the band is a narrow laurel wreath, bound together by crossed ribbons in four places. Legend : CAROLUS – SECUNDUS – DEI – GRATIA/ MAGNÆ – BRITANNÆ – FRANCIÆ. – ET– HIBERNIÆ – REX – FIDEI– DEFENSOR There is nothing in the design of this Seal calling for special notice. Nor is there anything in its history that was remarkable, except that one night it was in great danger of being stolen, as another Great Seal, later on, actually was, but this Seal escaped owing to the tender care bestowed upon it by the Lord Chancellor in whose custody it was. “About one in the morning ” (of the 7th February, 1677 ), says Wood, “the Lord Chancellor Finch his mace was stolen out of his house in Queen Street . The Seal laid under his pillow, so the thief missed it.” The purse, however, was stolen with the mace, and the thief, Thomas Sadler, attended by his confederates, made a mock procession with these in the neighbourhood of the Lord Chancellor's house, ( Lincoln 's Inn Fields). Whatever amusement Sadler may have found in this proceeding he had speedy cause for repentance of the theft. Within six weeks he was hanged for the crime at Tyburn. This was the first Seal handed to the infamous Lord Jeffreys, and by him it was held until it was defaced. SOURCE: Public Records Office. United Kingdom